It was bound to happen some time! Two weeks ago, my beloved Frankenstein of a laptop finally died, and I simply did not have it in me to fight to assemble a blog post. It’s the first time that I’ve missed a planned post since I started this blog, so I’m super happy to be back in action this week with a post that’s super exciting. I’m so pleased to host a review of forthcoming LGBTQ2S+ novel You Exist too Much, by BIPOC author Zaina Arafat, by BBB’s new regular contributor, Jack.

I’m also thrilled to be able to share a guest post from an author for whom I have deep admiration, Isabel Stirling. She is the creator of some FABULOUS queer witches in her YA novel These Witches Don’t Burn, and its upcoming sequel, This Coven Won’t Break! I feel especially attached to celebrating Isabel’s latest book because I celebrated my own birthday on May 3rd, and her book releases on May 19th, so we are Taurus twins! More on that later…

First! I want to share a quick shoutout to AJ Vrana. Her debut novel, The Hollow Gods, comes out with Parliment House Press on July 28th. I participated in the cover reveal for this novel on Twitter, and since then, AJ’s joined the list of authors who I represent as an agent. I’m super proud that The Hollow Gods was reviewed by Publisher’s Weekly this week!

Jack’s Review: You Exist too Much, by Zaina Arafat

Zaina Arafat is an American and Palestinian writer and journalist and teacher. Her debut novel You Exist too Much is a diasporic piece of fiction. The story is told in flashbacks, beginning with the shaming of a twelve-year-old Palestinian girl, whose feelings of not belonging are externalized. It’s a story told in cyclical flashbacks, similarly to how we live life. Geographically, the novel mainly alternates between the US and the Middle East, between New York and Palestine.

This novel explores the meaning of living on the margins, of wanting to fit in a neat category. As an American and Palestinian woman, who has loved both men and women, she exists in the overlapping centre of a Venn diagram. The protagonist exists too much, yet, struggles to occupy space for herself. Arafat explores the pervasiveness of intergenerational trauma, and how it affects one’s identity.

Content warnings in You Exist Too Much include Emotional manipulation and Eating Disorders. While at a retreat, topics including sexual assault (from the perspective of the perpetrator) and substance abuse are mentioned.

When the novel begins, we know that the protagonist is in pain. It is the kind of emotional pain that manifests physically, the pain that makes You Exist too much an accusatory statement. The protagonist attempts to heal by falling in love with others, eventually realizing that one person can’t simultaneously occupy two bodies. We follow the protagonist as she confronts the different ways in which she exists.

This is a novel about existing and occupying space, it’s a novel about visibility and acceptance. The protagonist is presented as out of sync with the world, her live-in girlfriend and her own self. The novel embraces missed connections and opportunity, depicting the fleetingness and intensity of desire. You Exist Too Much is a story about identities and the complexities of attachments. Arafat invites us to question what obsessions, attraction and attachments all have in common.

Before I jump into Isabel Sterling’s awesome and creative guest post, I want to talk a little bit about why the publication and popularity of These Witches Don’t Burn and This Coven Won’t Break are such huge accomplishments.

YA fantasy is a hard market in traditional publishing. Looking at the deals made so far in 2020, there have only been 10 acquisitions in children’s (including MG and YA) fantasy, across all imprints, this year. One of them is a Lucasfilm IP property, and one is the next in the Keeper of the Lost Cities series, so really, it’s more like 8 deals total for new books in that space, in the span of nearly 5 months. In 2019, there were 11 total deals in that space that were not series continuations. The competition is fire!! And yet, Isabel’s books are doing great.

Also, shoutout to writer KJ Aiello, who helped me out with this post, and asked: does crossover potential (ie, books that could appeal to YA or adult audiences) help fantasy books that are going on submission in traditional publishing? The unfortunate reality is, when a book is submitted to an imprint, you either sub to a YA imprint, or an adult imprint. The only real exceptions to that are SMG, which has St. Martin’s/Wednesday and acquires for both age groups, Tor, which encompasses Tor Teen, and Amazon, which publishes specifically with an eye to YA that is actually written for adult audiences.

But adult appeal in YA-branded books is actually somewhat essential. A little over 50% of YA readership IS adults, and in addition, YA novels have to appeal to adults because they are often the ones with the purchasing power even if the books’ audiences are younger. Educational wholesale markets are a huge part of that – so not only are publishers aiming to appeal to adult readers of YA, but they’re also aiming to appeal to parents, teachers, and librarians. Fantasy novels aren’t seen to have as much of a place in a classroom setting as some other kinds of novels, partially because of the stigmas that surround all genre works as being seen as less-than compared to more “literary” work. Also, YA as we know it has only existed since the 1970s, so it’s by far the newest category in the traditional publishing industry, and it’s only been seen as legitimate since the late 1980’s, early 1990s.

If you want to learn more about YA books in general, YA fantasy, and on the attitudes toward genre versus literary works in broader publishing, here is some further reading:

Hello, Readers! Isabel Sterling here. To celebrate the upcoming release of This Coven Won’t Break, emmy suggested a tarot reading for my three main girls, and I thought that sounded like a wonderful idea. I don’t normally let myself think about what happens to my characters after their book is done, so getting to read for Hannah, Morgan, and Gemma was really fun! The cards had some interesting things to say.

For this reading, I used the Modern Spellcaster’s Tarot Deck. I really enjoy this deck, especially because all of the major love cards are same-gender couples, and there’s racial diversity in there, too. Definitely a step up from many super white, heteronormative traditional decks.

Since This Coven Won’t Break is her story, I started with Hannah. 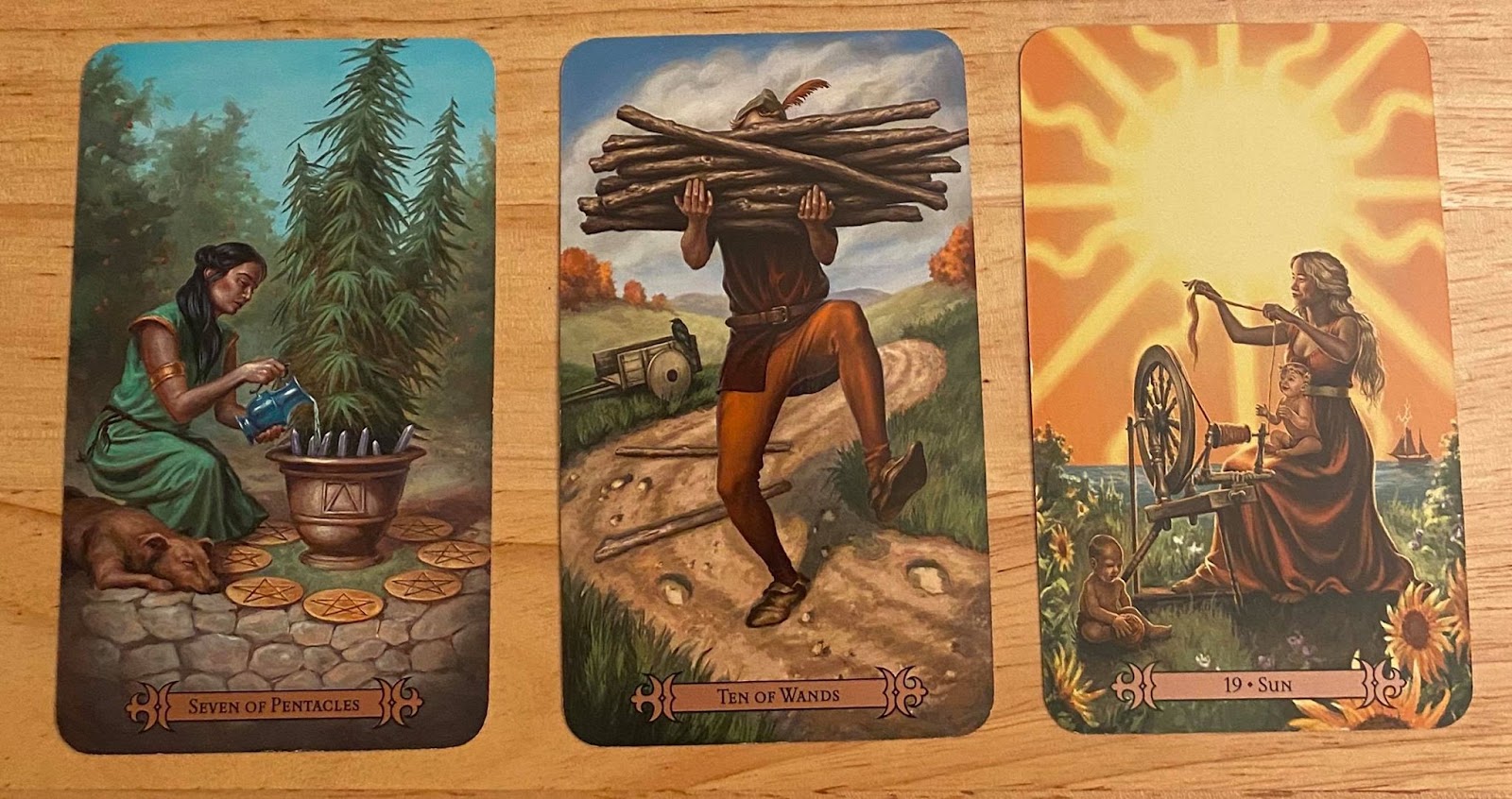 (Pictured: Seven of Pentacles, Ten of Wands, and The Sun)

In This Coven Won’t Break, Hannah works a lot with the Council, the organization responsible for protecting the three Witch Clans and keeping everyone in line. Hannah plants a lot of seeds with them, so the Seven of Pentacles tells me she’s going to be working to help those efforts grow and bloom. Unfortunately, it looks like Hannah will try to bite off more than she can chew and work harder than she should (Ten of Wands). If she’s not careful, some important things could end up dropped. Luckily, she has Morgan and Gemma to remind her to actually get out and have some fun in the sun, and overall, she has a really awesome summer.

Hannah definitely deserves some rest, relaxation, and brightness in her life. So The Sun card was nice to see. It also looks like she has some babysitting in her future, and perhaps some unexpected twins from Sarah and Rachel? (Who knows! Not me! Like I said, if it didn’t happen in the book, I honestly don’t know.)

Next, let’s take a peek into Morgan’s summer. 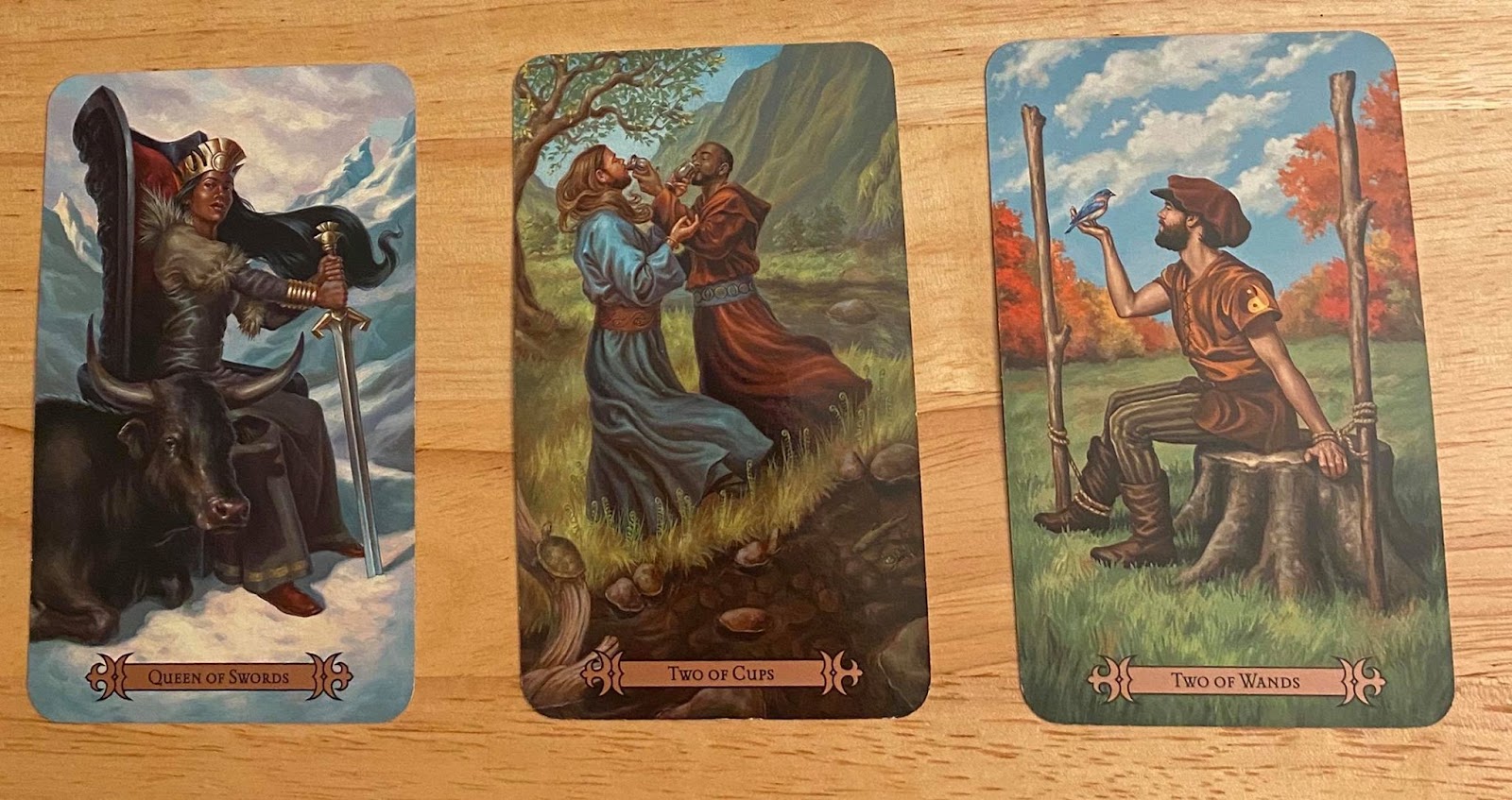 (Pictured: Queen of Swords, Two of Cups, and Two of Wands)

Well, without getting into spoilers, Morgan kinda Goes Through It during the course of This Coven Won’t Break. As a result, the Queen of Swords is telling me her mom gets a little over-protective about things. Which, honestly, is reasonable. With the Two of Cups, though, it looks like Morgan still has plenty of time to hang out with Hannah. I see lots of dates at their secret spot in the woods. (And see what I mean about the same-gender couple! I love this deck.)

With everything that happens to Morgan, the Two of Wands tells me she’s a little nervous about leaving the nest to go to college. She’s just finally putting down roots in Salem and isn’t sure she’s ready to move on and start her “real” life. 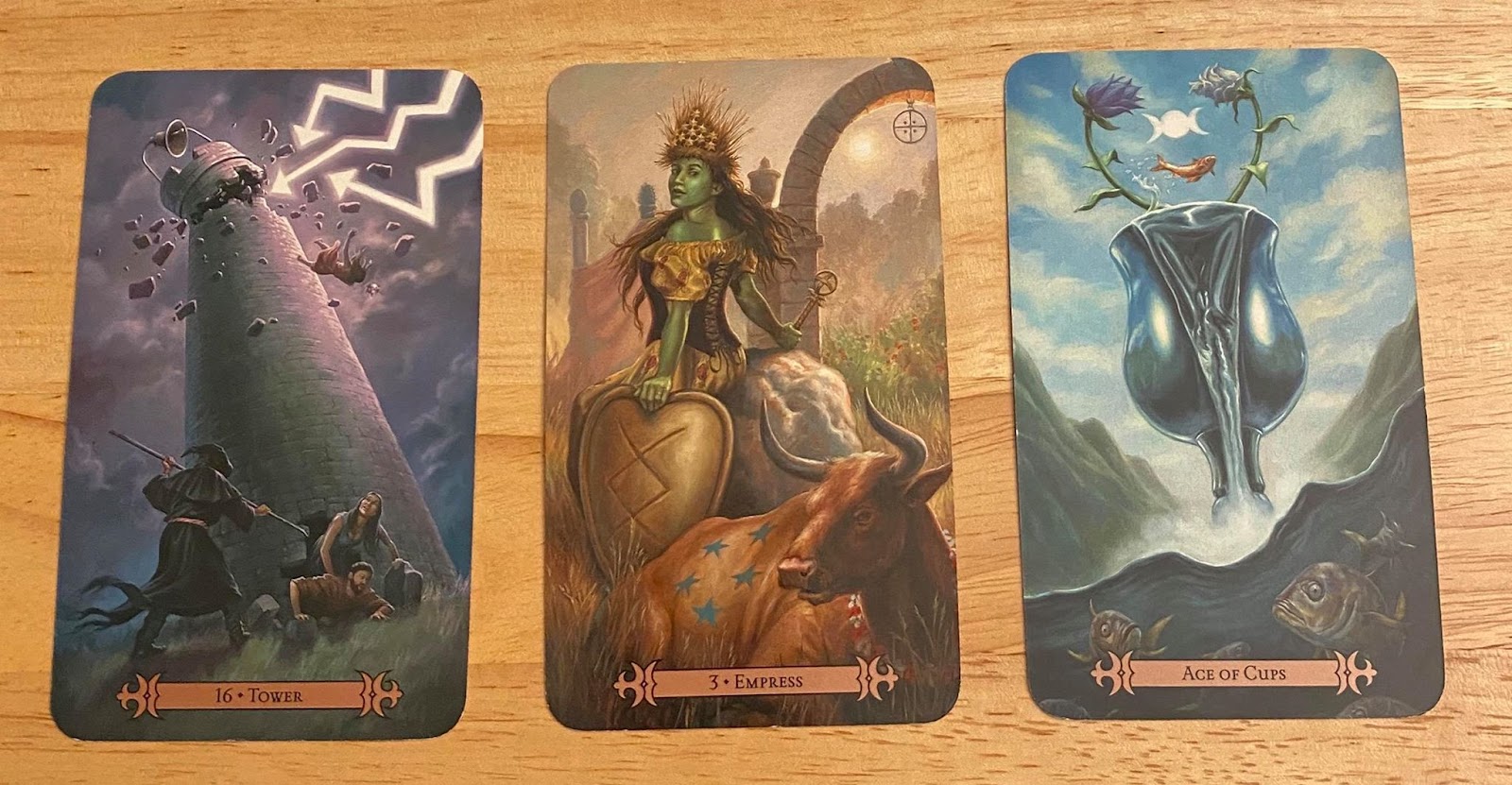 (Pictured The Tower, The Empress, and the Ace of Cups)

Well, The Tower is a total spoiler, so I can’t really say much except Gemma’s world turns upside down a bit near the end of the book. The Empress, though, tells me Gem spends much of her summer further honing her interest in all things witchy–tarot cards and crystals and everything. The Empress is often linked to motherly instincts, but in Gemma’s case, I see that as her connection with Hannah’s boss, Lauren, and Gemma getting into with her feminine intuition.

Finally, it looks like there might be some romance waiting for Gemma with that Ace of Cups. Her crushes in These Witches Don’t Burn didn’t turn out so great, so she definitely deserves a little post-graduation fun. Maybe she can double-date with Hannah and Morgan!

That’s all the cards had in store for us tonight. I hope you found this fun, and if you haven’t yet, you can order These Witches Don’t Burn here and This Coven Won’t Break over here! Happy reading!

PS, if you enjoyed this post, please consider leaving me a tip! It only takes a minute, and it allows me to keep creating content just like this, buying food for my pets, and pursuing my career as a literary agent!